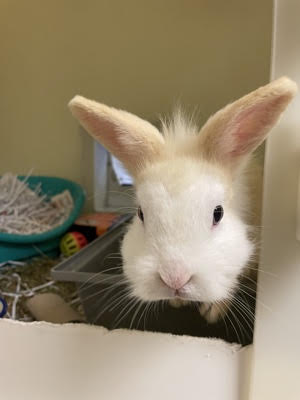 Windsor came into the shelter on 1st June. He was found in a park in London and picked up by a member of public. But she could not keep him. We think he is about 6 months old, we have vaccinated, neutered, microchipped and wormed him.

Windsor is our very own jubilee bunny, he came in over the jubilee weekend and he does definitely want to be part of the party. He was not in the best condition when he arrived at the shelter he was covered in urine stains, he should be white!!!! his clean fur will come through. He was also underweight but is eating for England now!!!

He is such a little character and loves people. He loves being touched, not great at being picked up for long as he wriggles so much. He loves his food and treats. He is looking for a spayed female rabbit for company. He will need owners who have bonded before as he does not know how to act around rabbits and needs to be taught some manners!!! He would be ok with older children but not young children as he is so quick and wriggly