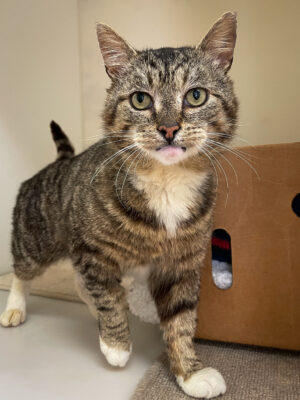 Hobo was brought into us via an inspector. He had been reported as a stray with a bad leg injury which needed attention asap! This has now been sorted out, and after a month of being with us, is now up for homing. He does still need a dental, but this will be done before he goes home. Hobo has been living rough for around six years! Being fed by various people in the neighbourhood. He is very sweet considering he’s been without a home for so long, he loves a fuss and is a real character cat! He also enjoys his food and attention. Hobo would love a home with no cats as he likes to be the king, and he would prefer a home without young children unfortunately. Hobo will definitely need his own garden as he enjoys going out, and now he’s been neutered, will not wonder off or go too far away.