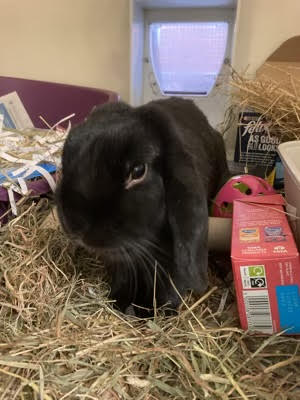 Chris and his brother, Will, were brought into a local vets as they were fighting. After being neutered, they failed to re-bond, so their owner signed them over to the vets, who placed them with us for re-homing.

Chris is looking for a calm, spayed female rabbit. We did rehome him to live with an older female rabbit but he was too lively and energetic for her, she could not cope with his energy and would not accept him. Due to this we are looking for a home for Chris with a rabbit of similar age who can keep up with his energy! He likes to run around, he loves treats and food. He is a clean and tidy rabbit so could live inside. He could cope with older children but not young children.